I’d been shacked up in the editing suite for the best part of a month squeezing out some commercial jobs to make way for fishing. It was the first few days of February and I was keen to get out on the road and shoot a couple of sections for our upcoming feature film Backcountry – South Island, the follow up film to the very successful Backcountry – North Island. To my mind the timing was perfect, the cicadas would have been on the wing for a couple of weeks now and the trout would be fat and willing, the rivers too had just flooded after some very dry weather and would be returning to perfect shape in the next few days. We had a week of glorious weather approaching and it seemed that I had lined up all of my ducks in a nice neat row.

For the next three days, I would be going into the backcountry with a great American fellow called George. He would make a great character for the film because he is a young guy who is so besotted with the fishing down here that he is trying to emigrate so he can live here permanently. He spends his holidays hitchhiking his away around the country fishing as he goes, the very definition of a trout bum.

We had put a lot of work into picking a section of river that is remote but gets less pressure than other parts of this famous fishery. We secured a few nights in a hut that is owned by a local farmer on the banks of the river. Everything was perfect and the first evening we had a look at the river. It was still high but dropping fast, it would be bang on by the morning.

We woke early but I was in no rush to get down to the river. I’d rather let the fish get moving before we hit it, I reasoned to George. Then as I was sipping my coffee, that noise, the one we all dread to hear. It sounded like a fix wing at first but experience has taught me that sound so often turns into a chopper. As it neared we ran out of the hut and sure enough a Hughes 500 blasted up the valley and landed around 1km up river. FAAARRRKKK!

Bitterly disappointed, we decided to walk downstream 2kms and fish back to the hut. That would give us at least one days good fishing to nail some nice fish on dry fly. On the walk downstream, the sun revealed itself over the mountains and warmed the whole valley. But there was something missing, no cicadas chirping. George made a comment to me about it, ‘They must to having a slow start to the day!’ I responded but I had a deep feeling of dread. A few days previous, it had snowed which is very unusual for February. The guy behind the counter at the local tackle shop had reckoned that would be the end of the cicadas. At the time I thought we was off his rocker, now I was beginning to appreciate the value of his local knowledge.

Sure enough the first fish George cast to absolutely freaked out when the cicada passed over it. The next fish too and the fish after that. He switched to nymphs but the fish were spooking from the indicator passing over them! It was a tough day at the office. Any slightly wayward cast was meet with an instant spook. George toughed it out and managed to get one three pounder to the net. Next day we had no choice but to fish the water that was chopper the day before. We saw some very big fish but they were on edge and cicada flies were routinely snubbed. That day ended with two fish to the net both three pounders. The filming trip didn’t have much momentum so far.

Day three, we decided to beat a retreat and fish a gorge section lower down. It was a nasty two hour walk in with the camera gear for no fish seen. I pulled the pin and decided I needed to get back to town to regroup. A quick phone call and I had Paul Procter, a well-known English fly fisher, fired up to go somewhere filming with me. The problem was he only had a few days free and we would have to head into the next location the following day. I thanked George for his time and wished him luck for the rest of his holiday.

The next few hours were spent with Paul deciding on a location and then packing backpacks until 2am. This new location was a 20km walk to the fishing so we had to try to pack light. Easier said than done when you’re filming. The lightest I could get my pack was 22kg, Paul’s was much the same.

After an early start we were on the trail by 9am. It was a huge day walking in pretty hot temperatures and by the time I got to the hut I was totally shagged, it was almost 3pm. No reason to worry because we were on the banks a big fish river with not a soul in sight. I suggested to Paul that we hit the river early just in case there were choppers around. Up at 7am and to the river by 8am.

Next morning as we were putting our wading boots on, sure enough that f#%$*#& noise again! We ran out the front of the hut waving our arms and jumping up and down to no avail. Double FAAARRRKKK!

The whole ordeal unsettled me, choppered twice in four days are kidding me! I guess that rubbed off on Paul because he fished like a tit. That statement should be qualified; he fished like a tit by his standards, which are very high (he is probably the best trout fisherman I have filmed and I’ve had the honour of filming some very good anglers). We got one fish to the net that day, a 4 pounder.

Back at the hut we were joined by a party of four trampers. They commented at the sign on the hut wall that said to boil all hut water thoroughly. Paul and I had been boiling everything to be on the safe side. The trampers laughed it off as they took big swigs of hut water from their cups. Seeing them do that we dropped our guard. The next morning we only par-boiled the water for a couple of cups of tea. Should be fine I thought.

The fishing that day was even worse than the day before, it was only when we snuck up a small tributary that we found water that didn’t have foot prints. We only found one fish in that creek but he was a beautiful seven pounder that towed Paul around the small pool until he was lying in the net.

The next day we walked out. We set off early in the morning to beat the heat and the few kilos of food that we had shed made a big difference. We collapsed into the car seats and headed for civilization. As I pulled out of the car park, my stomach rumbled. It rumbled it that way that you know its more than just hunger and you know you are about to be in big trouble.

Giardia infection is marked by abdominal cramps, bloating, nausea and bouts of explosive diarrhea. So to avoid going into too much detail, I can tell you that is exactly what I had for the next three days and maybe add extreme malaise just for good measure. At times I could barely lift myself from bed to avoid soiling myself.

Paul spent most of the time laughing at me running to the loo, or pretending to give me a spoonful of cement or putting the bucket just out of reach so I had to fall out of bed to vomit. Oh yeah! He was having a great time, fishing all day and torturing me inbetween times. You see he was fine, no syptoms at all. He reckoned I had heat stroke because I hadn’t drunk much water on the walk out. I kind of agreed, although at the time I wanted to die so I didn’t really care.

Then one evening, Paul got some stomach rumbles. Thirty minutes later, he was laying in bed – vomiting and moaning like the damned. Payback is a bitch! Haha. I choose to take the moral high road and not torture him (actually I just didn’t have the energy). It took Paul a full three days to recover. In the meantime I planned our trip back to the river where we had just been. It had showed enough promise, if we could just get in there before a chopper it could produce the goods.

We had slimmed the packs down even more, I was going to have to get by without some filming equipment and I only had two camera batteries compared to my usual four. Paul was heading back to the U.K. soon so it was our last roll of the dice.

We made good time on the walk in. We were out of the hut at 7am the next morning and racing up the river, no one was going to ruin this for us, we had put too much on the line to be rolled over again. Luckily the fish had also read the script. Each pool had a large fish feeding in the head. Paul missed a couple that he probably should have got. We moved on, finding a big fish feeding in shallow water. A perfectly cast, the small dry pulled him to the top, and then painfully the fly was pushed out of its mouth as its jaws closed. Paul struck and there was nothing. His shoulders slumped, I sensed the rollercoaster ride of the last week was weighing heavily on him.

Next pool was a stunner, we could clearly see three fish feeding. Paul hooked all three. Fat fish that jumped and pulled line at will. Each one of those fish was close to seven pounds. Paul had the spring back in his step. Good job too, because the next small pool had a very large fish feeding in a tricky current. Paul hooked that first cast, it weighed 9 pounds, a beautiful hen that was in perfect condition.

In the space of two hours we got enough footage for a brilliant section of the film, it will only amount to 7 minutes of the entire movie but it will be a vital part of the narrative. It had taken 14 days, 800kms of driving, 140kms of walking and 2 bouts of Giardia to get there but the footage shows the relief and ecstasy of Paul’s experience – that is something you just can’t fake. When it comes to making fly fishing films doing it tough can bring the best results. 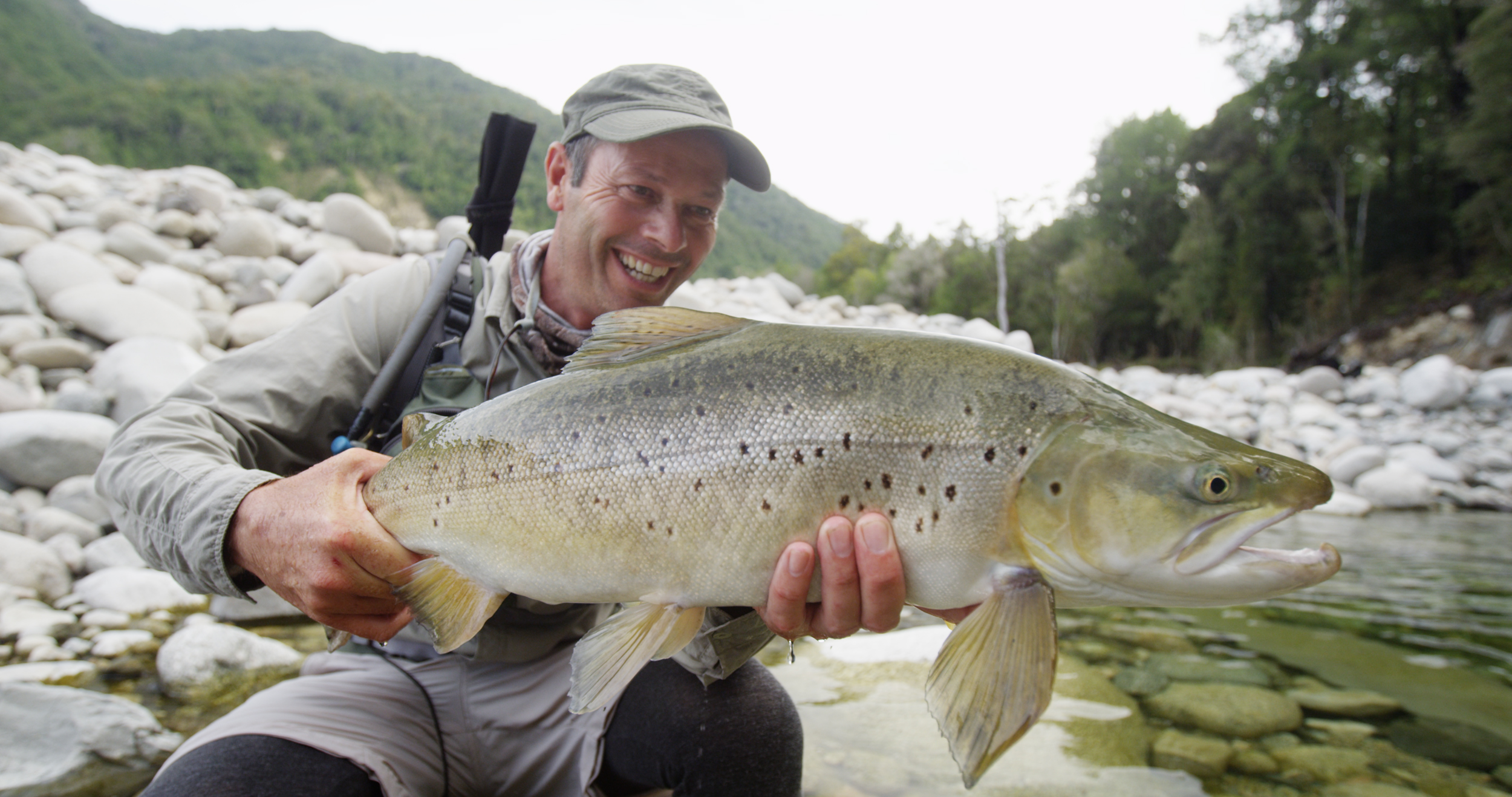 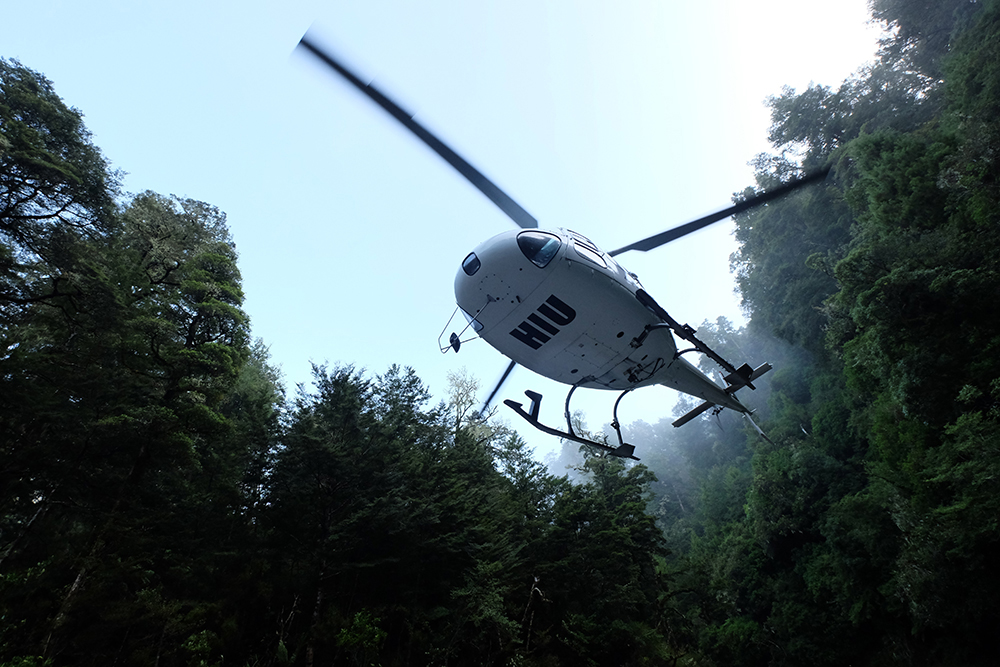 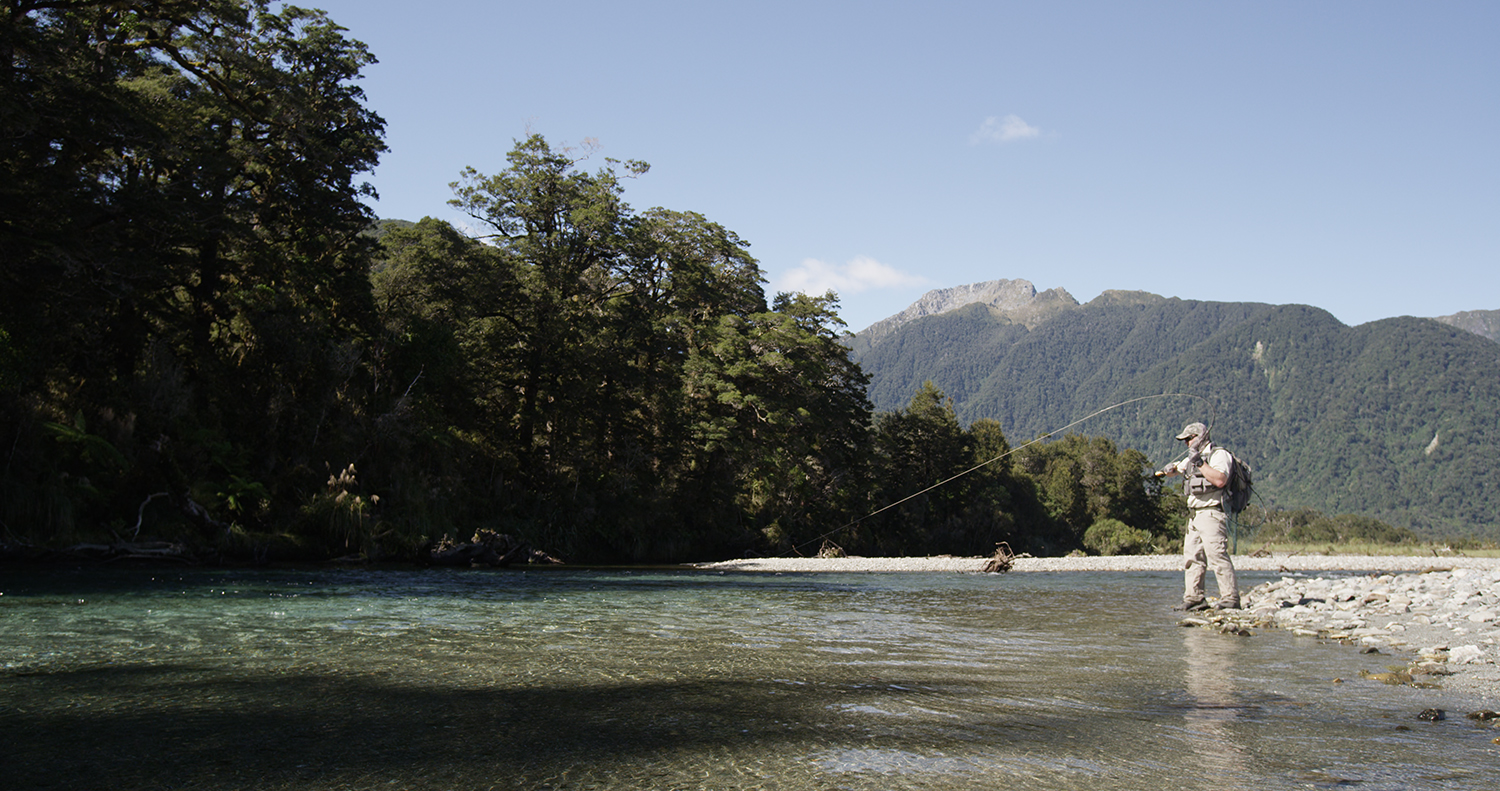 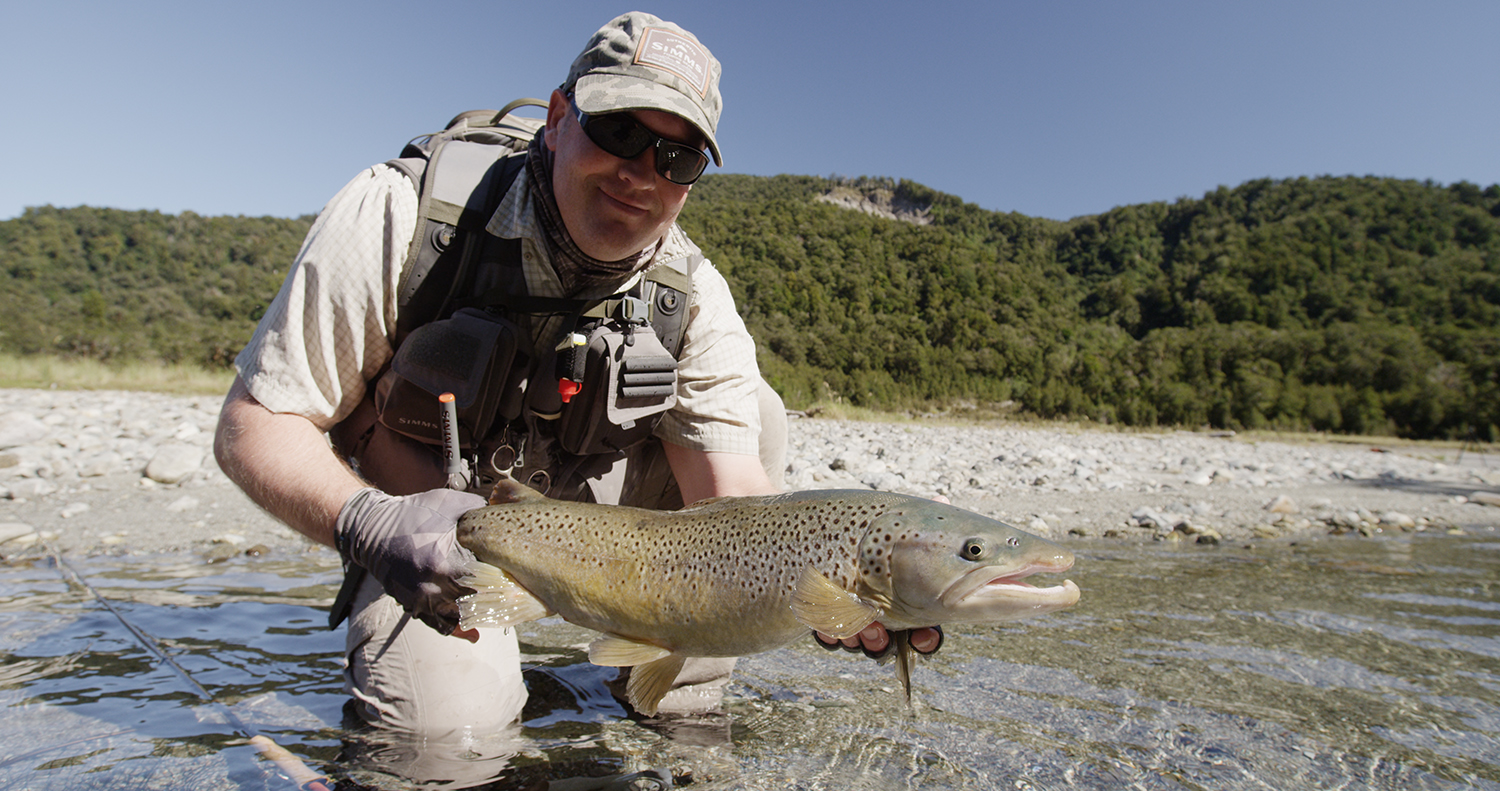 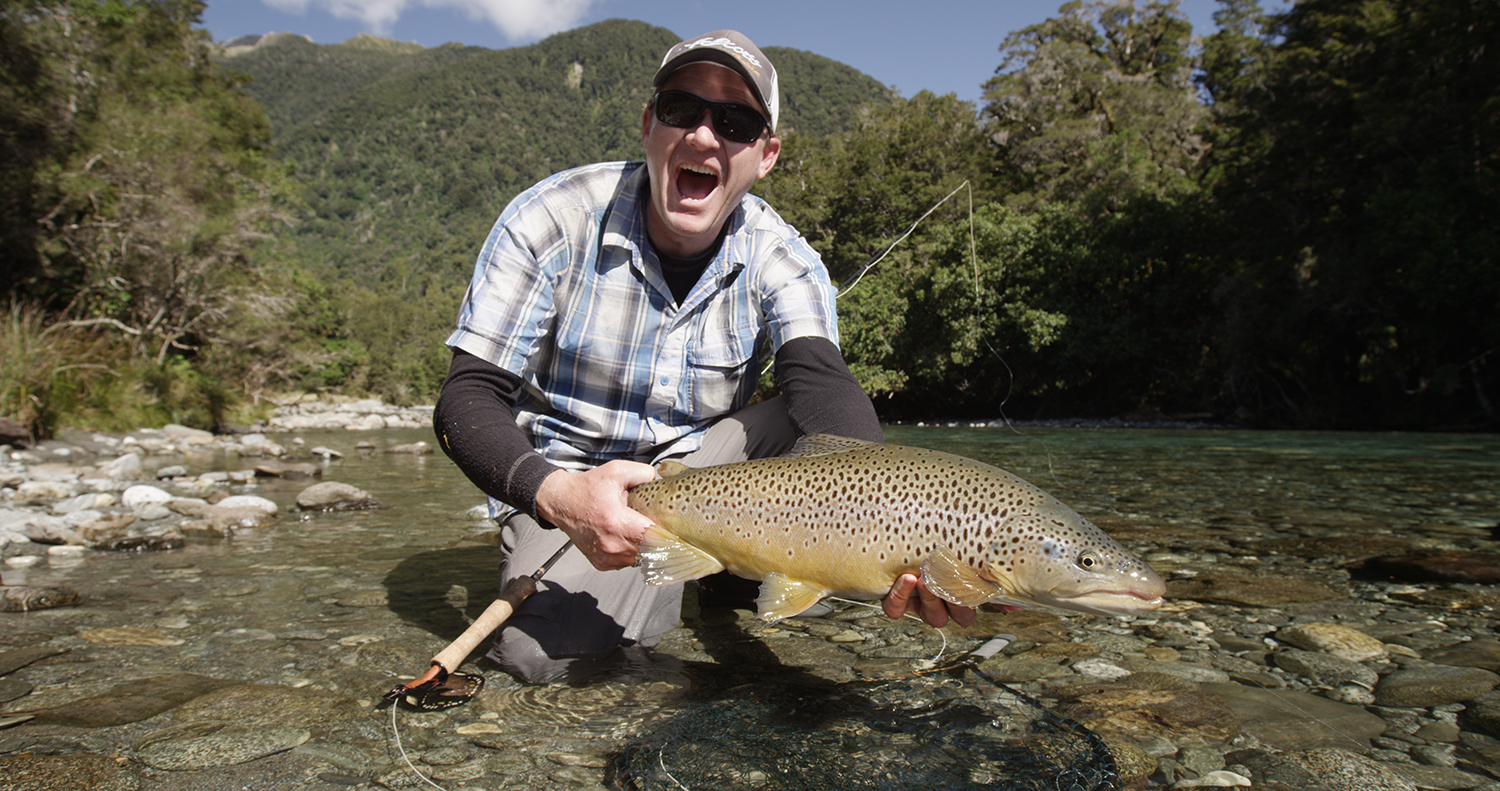