The wind was ripping. I was attempting to balance on a small rock by the lake edge but my position was constantly threatened by the waves that were crashing about my feet. Occasionally, the wind lashed a sheet of water straight off the lake and launched it in my direction. This lake was having an identity crisis, it was behaving like an ocean!

I was staying at the well-known fishing lodge Estancia Laguna Verde, the best option for fishing the famed Lago Strobel. But the conditions were far from perfect for fly fishing. In fact the guides had raised an eyebrow when I indicated where I wanted to go for the afternoon. Never a good sign!

I somehow managed to cast my fly just beyond the rolling waves, a distance of about 6 meters. As I tightened on the line it came solid and a seven pound rainbow trout burst out of the water in a violent, handshaking jump. It landed and continued to rip line as it charged up the shore, surfing the waves as it went.

I slide that fin-perfect, wild rainbow trout onto the bank and bent down to admire it. It was probably the best conditioned wild trout I have ever seen, its small head was attached to a football shaped body and silver flanks, like that of a steelhead, glistening in the afternoon sun. I gave myself a mental dressing down, how could I be disappointed at catching such a great fish? A fish that anywhere else in the world would be the highlight of your day, quite possibly the highlight of your life!

Lago Strobel or ‘Jurassic Lake’ as it has been nicknamed, has the ability to warp your sense of reality. This huge body of water is cradled by the Andes Mountains on a high alpine plateau in Patagonia, South America. It is a trout fishermen’s El Dorado, a place of myth and legend – a freak of nature.

Join us on one of our hosted trips – Dec 2018 : Jurassic Lake Hosted Trip

Before I went to Lago Strobel I was under the impression that most of the fishing would be blind casting streamers into deep water. While this was something I was more than happy to do to catch big trout, I am addicted to sight fishing and I was hoping for at least a couple of sight fishing opportunities.

After a few days of fishing, it became apparent that a large variety of methods work on these gigantic fish. The crystal clear water means that sight fishing is very productive and on numerous occasions I was casting short lines to 5kg plus fish as they cruised the shoreline. Heart pounding stuff!

The most pleasant surprise of my trip was the dry fly fishing. Fish can be caught on big dry flies in the lake in almost any conditions. The sight of an 8kg fish crushing the foam fly of a fellow angler, as I watched on, will stay with me forever.

A lot of different dry fly patterns worked and the ‘big fly – big fish’ theory certainly holds true here. The biggest fish on dry fly all came from XOS foam flies such as the Chernobyl Ant. Foam is a great material to use as it will float high all day, making the fly much easier to see in waves.

The fish preferred a slowly stripped dry fly, rather than static. This retrieve is very exciting and also helps the angler stay in direct contact aiding solid hook ups, especially in windy weather. 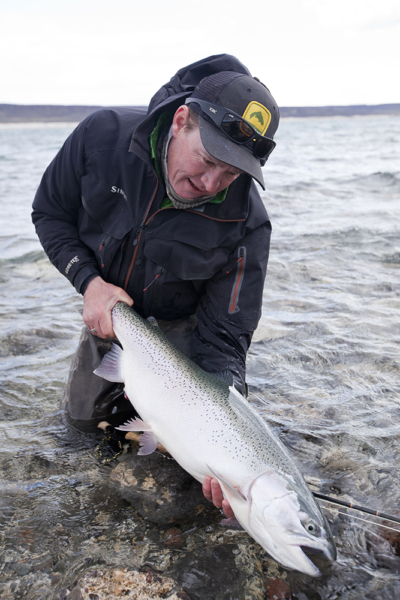 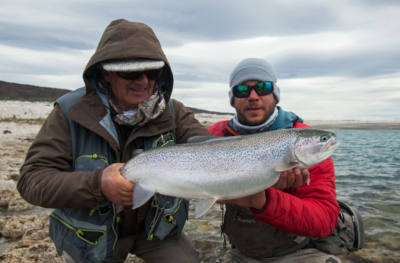 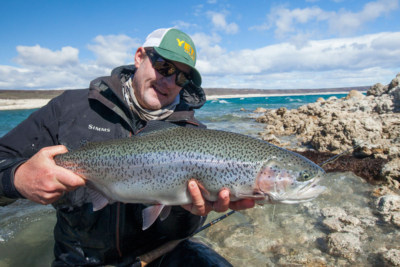 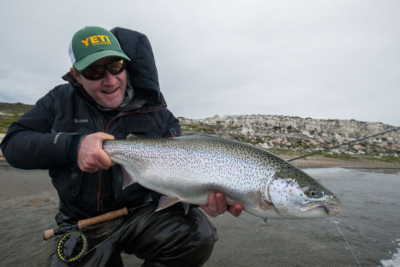 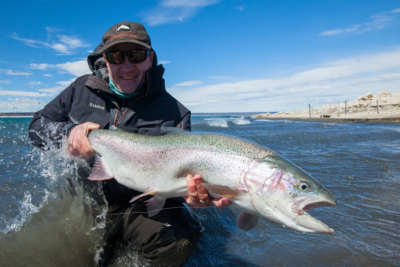